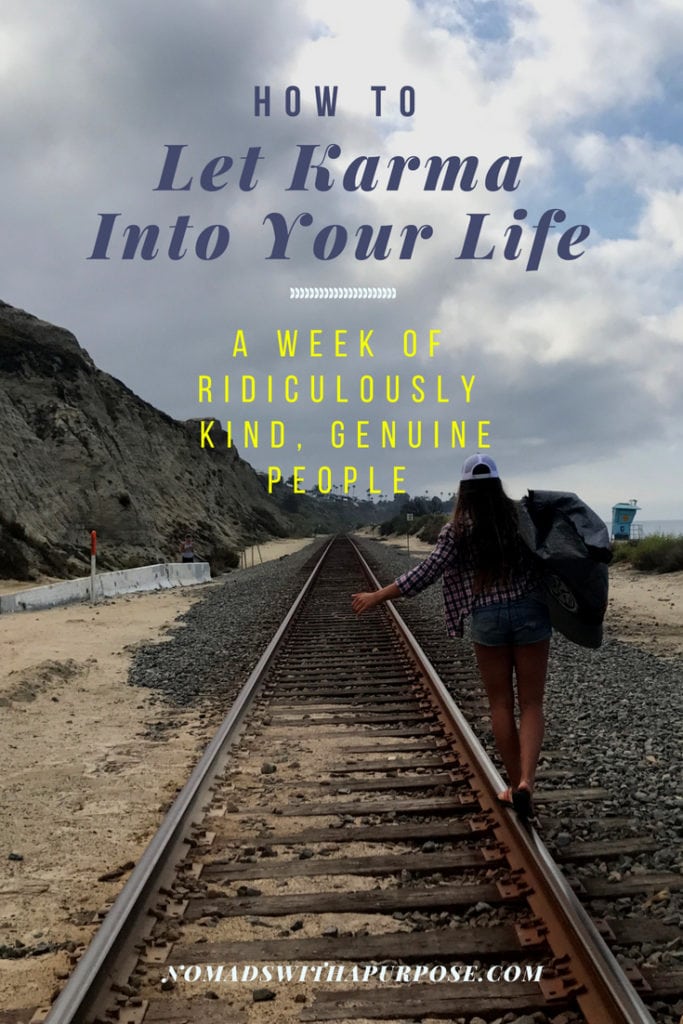 My calves can’t take this. I glance up and see the enormous tents the WSL has set up on the beach, but it doesn’t feel like it’s getting any closer.

I can’t breathe right. I know at any minute Tatiana is going to go into full meltdown mode and I’m scared.

I never put it past her to just stop walking and say she’s done, which means either we are sitting at Upper Trestles watching 50 surfers fight for one peak while 3 egocentric alpha surfers take all the waves or I’m carrying her on my back for the next 20 minutes in the deep sand so that my oldest daughter can watch the pros shred.

I’m tough, but all I can think is How the hell am I going to do this five more times this week?

I was so proud of myself for planning ahead and reserving a campsite at San Clemente for the week when the Championship Tour (of surfing) would be at Trestles. I felt so fortunate that they happened to run the contest the five days we were camped here. 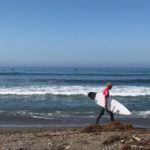 John John Florence walking out for Round 3 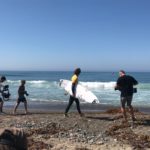 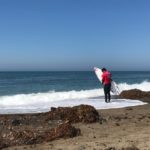 But I feel so angry that getting from the campground to the contest is so much work.

Forty minutes. Whether we walk in the deep sand during low tide or take the road and bike path first and then trek through the sand, it takes forty minutes either way.  I realize we’ve hiked 12 miles a day on a regular basis for the past few years but not in soft sand, rarely in this heat, and never so far with Tatiana.

Gabi walking the Trestles tracks down to the point

We finally arrive at our destination.

We sit down and breathe a sigh of relief. Tati even managed to not meltdown. I’m just about to fully relax and enjoy the contest when the man sitting next to us offers us his shade under his umbrella.

Now if we were still in Oregon or Idaho and this happened I’d think nothing of it. But in So Cal, I’m skeptical. We’d only been back in Southern California for a few weeks and I was already feeling the energy shift—the hustle and bustle that comes through in people honking, rolling stop signs-regardless of if there are kids riding their bikes across the street, and so many sirens.  Seriously, for 11 weeks we rarely heard a siren.

I appreciate the gesture and say “thanks, but we are good,” thinking that I really don’t feel up to socializing right now, probably because something about the heat, long walk, and crowded lineup is just making my soul agitated.

But my husband comes to my rescue. It was probably due to the cleansing sea breeze that he thrives on, but he was in his element and it was coming through in his welcoming personality that instantly bonded with our soon-to-be new friend, Brad.

Victor talked to Brad for a few hours while I was antisocial and watched the contest, happy to be sitting with my kids.

The next day, after another grueling forty minute hike while carrying surfboards–at least Tati and Jiraiya rode 2/3rds of it–we found Brad again on the beach and Victor did what he does best, conversed.

Sure enough, Victor invited Brad over for dinner that night. Now, I’m usually the one who opens my house up to strangers—or vice versa, let’s myself be invited into strangers houses.

It was odd and surprising for this gesture to be coming from my much more reserved, better half.Click To Tweet

I liked Brad. He was real. Some of his stories took me by surprise and I liked thinking, Is this guy for real? It’s a dying breed. The honest goodness, I-have-no-other-ulterior-motive-other-than-to-enjoy-my-day kinda person is definitely on the endangered species list.

We’ve become a race of I have to’s and I need to’s.

Maximum efficiency at all times because time is money (hey, I’m guilty of this too).

It felt normal to invite Brad in our home (motorhome) and share stories over a beer as if we’d known him our whole life. We offered for him to stay parked in our campsite and thought nothing of it.

In my head, this was normal and I’d expect the same hospitality from anyone else (you’ve been warned). He was grateful, to say the least, and he left us a kind note and unnecessary gift the next morning saying we’d hopefully meet up at the contest later that day, which we did. And the next day as well.

Fast forward to five days later and I’m really exhausted and grumpy from that long ass hike, not enough waves to go around to fuel my stoke, and way too much time in the sun.

Don’t get me wrong, it’s “cool” to be at a WSL contest and watch the pros, but I am never following the tour for a year like Jiraiya is dreaming of doing (unless he’s a competitor). I’m just not a very good spectator.

So we are supposed to free camp (AKA boondock) at Oceanside harbor, but the thought of even walking the ten minutes from the free overnight parking all the way to the beach with boards and whiny kids in the sun sounds horrible to me.  Trestles traumatized me.

It takes less than a minute of pulling into Oceanside Harbor and seeing sucky waves before I have my mind made up to head down to San Elijo, one of our favorite places In the world.

It’s Friday night so I know we can’t get a spot, but I’m hoping if we sleep on the street close by, we could wake up early and try to get a site for Saturday night.

It was a horrible nights sleep. There were so many people walking by the RV talking loudly, the train honking every hour, and the heat made it so that Victor and I barely slept.

But, the show must go on.

We woke up at 6am and walked straight down to the campground to get in line in hopes of getting a campsite for that night.  We did not want to spend another night on the road.

As I walk up I see there is already a line forming.

The actual line to get a site at San Elijo

I place my towel on the ground near the man asleep on the ground, who I’m guessing is first in line and chose to sleep there to get priority but I’m not convinced that he isn’t a homeless bum that just happened to pass out right there.  Next in line is a guy in a chair who is way too happy for so early in the morning. I am fearful again.

This is Southern California, people are rarely happy and bubbly, especially at 6 a.m.!Click To Tweet

But I’d learned my lesson earlier in the week with Brad-and besides, I love talking to strangers.

So as the caffeine from the coffee Victor just brought me seeps into my veins, I spend the next three hours getting to know the life story of Dino, his six year old daughter, Houdini, and his three year old son, Mariner.  With names like that, I instantly know I’m going to like these people—a little quirky but purely stoke about life—like me!

By 9 a.m. it’s time for the state park rangers to sell the empty campsites for the day. There are three available and we are number four…bummer.

Except that, Dino offers to share his site with us. Awesome!

Actually, I was a little hesitant at first because I didn’t want to feel like a mooch, but then I have this rule about, What would I do if the roles were reversed? And knew instantly that I’d totally offer to share my site with him and I’d be a little offended if he declined. Decision made. It’s going to be a party tonight.

Mariner was the cutest little thing

Tatiana loved having a friend to play with, Mariner might be the cutest three year old ever, and Dino was really amazing at playing the ukulele.

Tatiana loved playing with Houdini and Mariner for a few days

It ended up being a great day and that night, the friends we made, who were number 1 and 2 in line that morning, came by and hung out too.

But our trip got even better because the next night, when we had our own campsite, Dino came back with dinner for us, the kids got out the ukulele that my brother had recently got them and they started learning chords, AND our friend Brad from Trestles joined us in our campsite for a night. I felt good.

The karma had come full circle and my soul felt at peace.

(Left to Right) Campire with Brad and Dino. Victor and Jiriaya stoked about the Ukulele jams

And then, there was more. The following night I notice the guy camping next to me raking his perfectly organized campsite, with enough tables, firewood, chairs, and coolers to support a family as large as ours, but he was alone.

I kept waiting for other people to come out of his trailer, but a day later, only him.

We finally started a conversation with him and found out he was a San Diego local, who loves camping at San Elijo once a year for a week. He has a wife and six grown children, some of whom also had kids. They were all local too but were just too busy to make it down to the beach.

The next morning, he brought over seven BLTs. I was taken back that he barely knew us and had gotten up and made us breakfast. That night he cooked extra chicken and gave some to the kids. For the rest of the week it was the same thing…cookies, hamburgers, hot dogs. He went out of his way to spoil my kids.

7 sandwiches for the 7 nomads

I was bummed that his family was too busy to share this time with him. Of course, I don’t think it weighed down his big Samoan heart, but still, it’s typical of life today.

I know. I’ve been there. In some ways, I’m still there.

But in many ways, it’s why I chose to move to Bend, OR. While life is certainly not slow here, there is enough time to stop and smell the flowers and get caught up in an hour conversation with strangers.

We all are crunched for time and are very selective in who, when, and where we share this precious resource.  It’s not for any of us to make judgments on where others spend their time.

Instead, it’s up to us to bring awareness to our own choices and align our actions with our intentions.

Instead, it’s up to us to bring awareness to our own choices and align our actions with our intentions.Click To Tweet

Can you relate to this story?  Share a karmic experience you’ve had in the comments section below!

If you liked this post don’t forget to pin it: