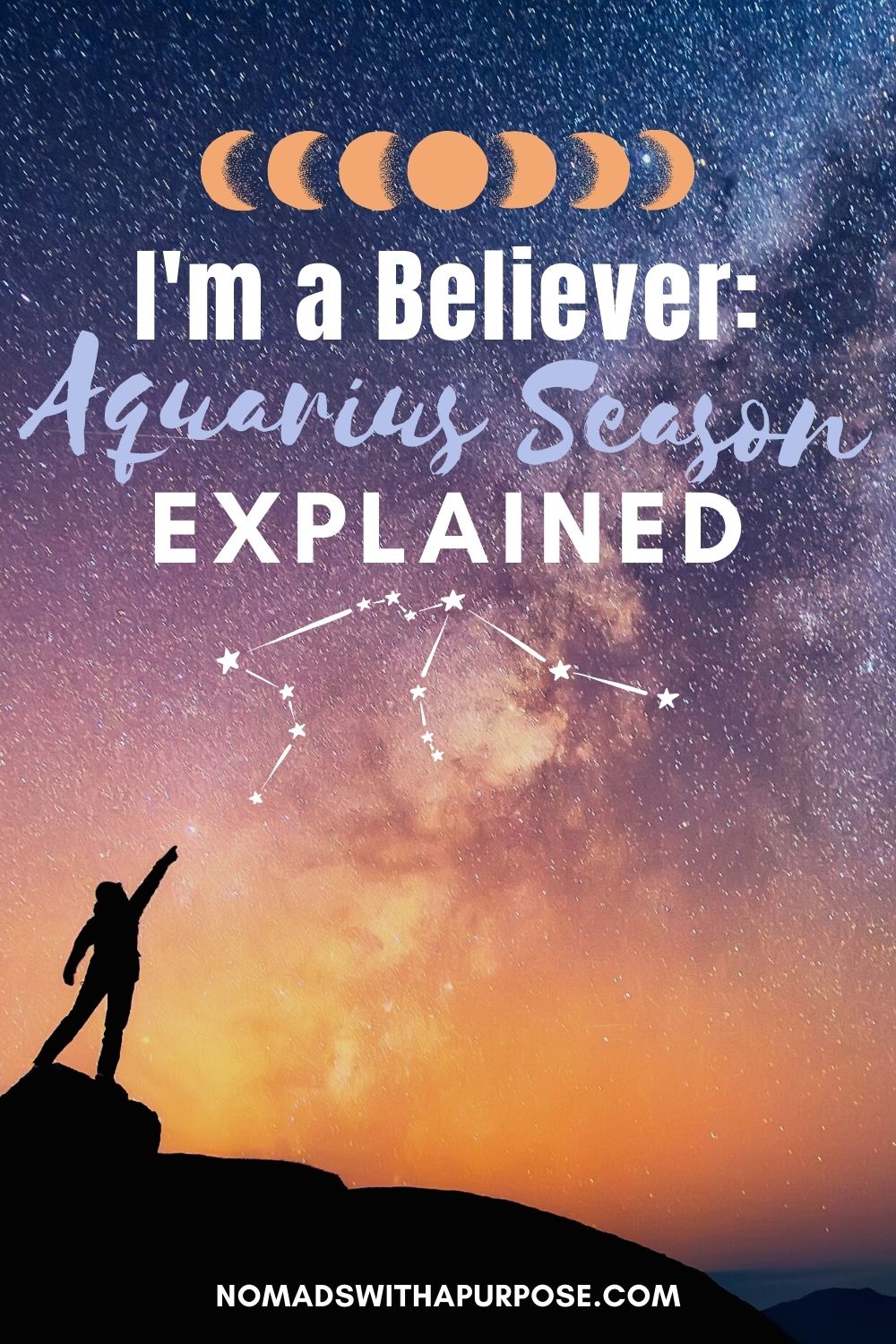 The Aquarius Age is heatin’ up!

If you’ve been following us for a while you may have heard us throw around this term a bit and I want to get some misconceptions out of way (just maybe).

I get it. It’s hard to hear someone nonchalantly throw around astrological terms without assuming it’s spiritual witch lady ju-ju.
But look…
I AM a spiritual witch lady so get with it.
Seriously though, there is a misconception.
A) Astrology is “taken with a grain of salt.” It’s used for guidance, not for the whole story. You are the actor and the director of the theatrical play called life.

B) “When you break free from certain fixed concepts about the way the world is, you’ll find it is far more subtle, and far more miraculous, than you thought it was“ ~ Alan Watts

…That’s the sage’s way of saying, ASTROLOGY IS TOTALLY SUPER LEGIT AF!! And here’s why:
I used to be an unbeliever. In many things. Most things actually. But then, I dipped my toe into the waters of mindfulness.
Actually, it was more like my mom shoved me in the waters and said “swim” (all good things, all good things).
By this I mean, I spent all of high school not surrounded by friends and schools and “society” rather, by trees and mountains and a general lack of people. There was no choice but to self reflect.
It’s sometimes hard for me to explain to people the sort of effect this has on you as a teenager because it’s so immensely huge but there aren’t many words for it.
Summed up: I learned who I was because I spent large amounts of time doing challenging, uncomfortable things and also, thinking with no objective in mind (i.e. walking for hours on end and allowing my brain to do what human brains do best: have ideas).
At 14, you start by thinking things like, “I wonder where I should go to college one day” and ”I hope I have lots of friends one day” but there only so many hours that sort of entertainment lasts and about a month into RV living those thoughts became very boring and very limiting.
So thoughts come to be creative and instead of what will I do? it becomes what can I create? so I got reallyyyy into photography.
Then, that got limiting, and I knew I was capable of more complex thoughts than just creativity (and I think maybe my mom felt that too) so when we spent 6 months campervanning through Europe, my mom and I started our blog/business together.

And so mindfulness just happens. Mindfulness is the space between thoughts where we can reflect on what we are thinking.

Point being, what started as mindfulness became self-reflection which became conscious awareness.
Geez, Gabi, get back to the dang point!
K, so I’m a believer now. Why? Because the more self-aware I became, the more curious I became, the more I questioned conformity, the more I sought out this truth of what mindfulness and consciousness really were.
Pin
Share
Share
Tweet
3 Shares
Now, I believe in the most radical intangible possibilities, not out of blind trust, but as a beautiful intersection of both science and God.
But really, astrology, Gabi?
Get this. It’s a quantum field.

Everything in our universe is interconnected in every which way possible.

And so, as human beings, sure we have the physical but we are not the physical body. We are just IN the body.
I believe astrology is valid because of this unified field and I believe it affects us because if a tree can emit an energetic frequency (which it can) why couldn’t entire planets do the same thing??? And so, I observe, test it on a personal level, and I believe.

So What Is The Age of Aquarius?

So typically, the inner planets closest to earth influence us on an individual level and the further ones influence us on a collective worldwide level.
Jupiter and Saturn, rulers of societies and economics, are currently transiting through Aquarius for roughly 20 years and it’s a pretty big deal that they’re doing this at the same time.

And since planets move predictably, people have actually been looking forward to this 20+ year period for decades.
Carl Jung himself even implied upon the possibility for our conscious collective advancement by saying:
“As we know from Ancient Egyptian History, these events are symptoms of psychic changes that always appear at the end of one platonic month, and at the beginning of another. They are, it seems, changes in the constellation of psychic dominance, of the archetypes or gods, as they used to be called, which bring about or accompany long lasting transformations of the collective psyche.  This transformation started within the historical tradition and left traces behind it. First, in the transition from the age of Torus to that of Aries, and then from Aries to Pisces, whose beginning coincides with the rise of Christianity (mentioned above).  We are now nearing the great change, which may be expected, when the spring point, enters Aquarius.”
Okay, so why’s it’s cool? Because everyone loves an Aquarius.

Personally, I’m very excited to see our world evolve in that way even if it’s only in a microscopic way.
“Aquarius is about preserving and honoring our individuality while learning to collaborate with others.” – Moon Omens
BUTTTT there’s more! While Jupiter and Saturn are applying Aquarius influence on a collective level, Mercury, the Sun, and Venus are all in Aquarius right now too.
So it’s a party!!!
And the Aquarius New Moon is TODAY!
Double party!!!
Can you tell I get overly excited about this stuff?
I use this all simply as a tool so here are the cliff notes I’ve interpreted:
The Sun in Aquarius is emphasizing all those themes I mentioned to bring extra awareness on contribution, individual expression, detachment from emotional opinions, liberation, and freedom.

This means the theme of the place where mercury is located (Aquarius), applies inwardly rather than externally. Which means…

We are reflecting on communications and inviting our logical brains to embrace a more visionary and idealistic approach.

We might have sudden sparks of originality or inner genius. It will also encourage intuition and creativity. Retrogrades are always a great time to reflect on self-limiting beliefs.

How Do I Really Feel About Freedom, Community, Contribution?

New moon today means we may have an intellectualized view of recent experiences. We may feel *read repress* emotions.

It’s a good opportunity to observe an emotionally detached view of our situation and life and see what needs to be changed in the corresponding areas of our life (freedom, originality, innovation, community, contribution).

Give Yourself Roses This Valentines Day

Venus harnessing the individuality of Aquarius could often make us feel alienated as we tend to see our differences as flaws.

This is a time to question whether we care more about our own values or being accepted into a group and why we do so. Venus, of course, also reminds us to bring about an energy of Divine Love. It also may bring about a change in values and in the ways we make money.

We Are More Than What Others Say

Venus also gets REAL close to Jupiter and the Moon tomorrow so it all crosses together now. Maybe we will question how love relationships reflect the same need for self-worth?

We may also consider how our need to be validated into a group prevents us from living aligned with individuality and also prevents us from contributing to the world in the way we’d most like to. Maybe we can think of ways to align with like-minded people.

Regardless of what you believe the stars are saying, I hope you use every day as an opportunity to expand your consciousness and embrace your journey to living a fulfilling and productive life!

You have successfully joined my weekly newsletter.

Add your email below and you’ll receive my newsletter all about redefining success with flow state, expanding consciousness, and unlocking the warrior within.

You have officially joined my tribe!